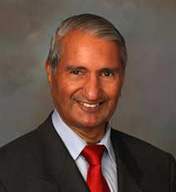 Dr. Khush is from Rurkee; District Jalandhar, Punjab, India. He received a B.Sc. degree from Punjab Agricultural University and a Ph.D. from the University of California, Davis. After serving as a faculty member of the University of California for seven years, he joined International Rice Research Institute (IRRI) in the Philippines as Plant Breeder and was appointed a Head of Plant Breeding Department in 1972. He retired in April 2002 as Principal Plant Breeder and Head of Division of Plant Breeding Genetics and Biochemistry. During his 35 year career at IRRI, he spearheaded the program for developing high yielding and disease and insect resistant varieties of rice which ushered in the green revolution in rice farming. More than 300 rice varieties developed under his leadership have been released in Asia, Africa, and Latin America. IRRI bred varieties or their progenies are now grown on 60 % of the world’s rice land. Rice production increased from 257 million tons in 1966 to 718 million tons in 2011. Most of the major rice-growing countries became self- sufficient in rice production and several have an exportable surplus.

Dr. Khush has made outstanding contributions to advancing the frontiers of rice genetics. He has written 3 books, edited 6 books and has written 250 papers in scientific journals. He has trained numerous plant breeders and served as a consultant to 15 national rice improvement programs.